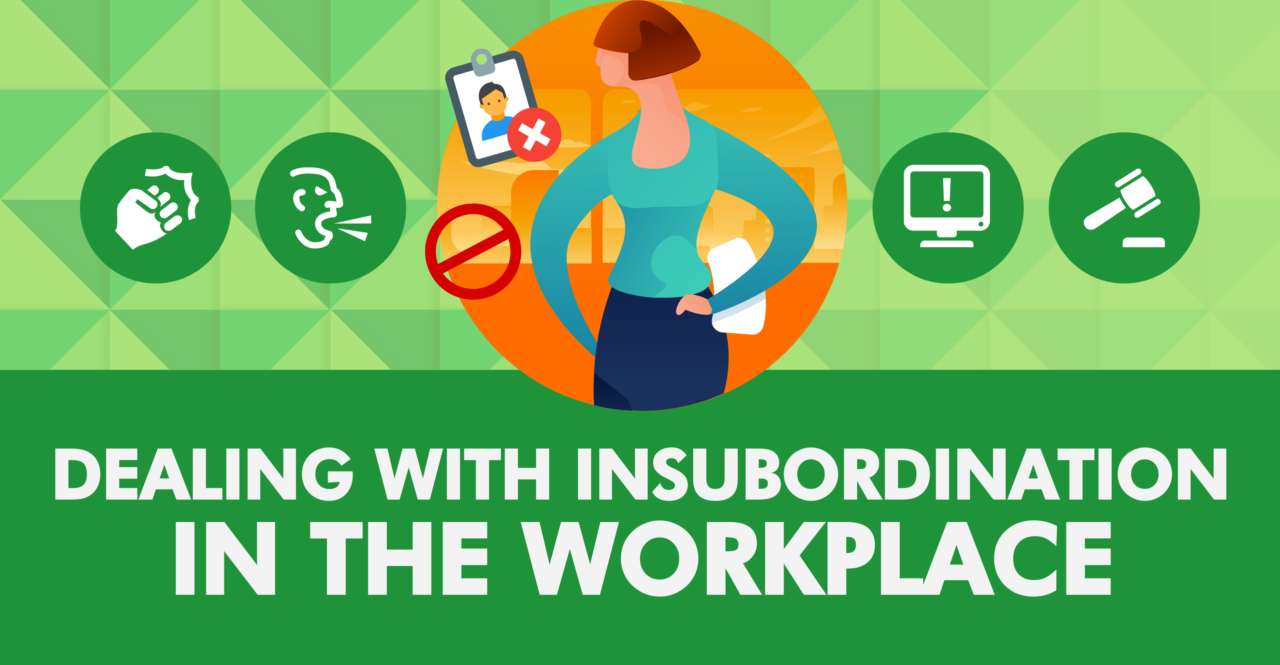 Dealing with Insubordination in the Workplace

Insubordination in the workplace can have many different meanings. Some insubordinate actions are far more severe than others and require swifter action. However, regardless of the nature of the insubordination, it is always important to take charge immediately whenever someone isn’t following the rules, following the protocol put forth in your employee handbook.

Looking at the strict dictionary definition of insubordination doesn’t do much to help us understand what it actually is. The straightforward definition describes it simply as a “defiance of authority”, however, most workplaces are not structured in a way where managers expect perfect adherence to management direction at all costs. More often than not, professional employees are given some leeway in how they approach their job, and strong managers recognize that they are the ones who are experts in their job, sometimes even relying on push back to achieve the best possible results.

Rather than abiding by this general definition, defying authority in the workplace requires three things to be deemed as insubordination:

By following this definition, we can avoid miscategorising situations as insubordination when they may simply be products of forgetfulness or unrealistic manager expectations.

Recognizing the behaviours that indicate insubordination is the first step to combatting the issue. Technically speaking, any variation from manager instruction is insubordination. But, in order for it to be perceived and reprimanded as such, there needs to be a willful component to it. Hence, distinguishing mistakes that can be dealt with as common errors from egregious insubordinate behaviour is critical.

Some employee behaviours can be easily classified as insubordinate, for example:

Each of these insubordinate behaviours demands an immediate and swift response. However, some forms of insubordination are subtler, but can be equally problematic. Some examples of these include:

Dealing with Insubordination in the Workplace

Despite what some may believe, many employees never set out from the get-go to become insubordinate or difficult in their work environment. Naturally, employees want to keep their jobs, and managers want their employees to carry out instructions. However, there are sometimes legitimate clashes of ideas, personalities, values, and beliefs, which can make this relationship difficult.

The first step to managing insubordination in the workplace is to put into practice several key actions that can prevent it from occurring in the first place.

Handling Insubordination After It Happens

Even the most skilled manager who follows the guidelines and rules as closely as possible will experience insubordination from time to time. When dealing with an insubordinate employee, there are some best practices to abide by in order to avoid inflaming the issue even further.

Insubordination is, at its core, unavoidable. Regardless of how many steps you take to prevent it, no manager is entirely immune to the possibility of an employee acting against their directives. There are, however things a manager can do to prevent insubordination as much as possible. Setting clear boundaries, and listening to your employees when there are disagreements, are excellent steps in the right direction. And, if it becomes too late for prevention, adequate action is essential – identify the behaviour, issue the consequences, document everything, and above all, be fair.